Under pressure by coastal development, land-based pollution and global climate change, Hawaii's fragile reef ecosystems are threatened with rising levels of coral bleaching and disease, crown of thorn seas start outbreaks (COTS) and marine invasive species. Are you ready to use the virtual reef to start collecting data?  Your work is important as the is an large numbers of transects that are part of the virtual reef. As time progresses more transects will be added. Currently all surveys apply to 2011 virtual reef transects. Later as more years become available, you will have the opportunity to measure the same transects over time. This will ultimately allow us to measure trends, an important monitoring capability.

This Activity Guide is designed to be used by both teachers/educators and students. Throughout the activity certain section will be labeled ADVANCED if they are written for teachers or educators to gain greater depth of understanding.  Students in 10-12 grade can read these sections if they wish to go in greater depth. Sections of this module identified as PREPARATION  should be done prior to engaging in the activity. Sections identified as BACKGROUND are knowledge necessary to understand the activity, and should be reviewed by all prior to undertaking the activity. STEPS marks actions you will take to actually perform this activity.

PREPARATION What will you need in for this activity?

This activity is aligned to these National Science Education Standards. This activity is designed to be spiraling, targeted to 10-11-12 grades, however, educators can teach aspects of this activity in grades 8-9 if they interpret the background materials for their students.

BACKGROUND How much of the reef bottom is covered with live coral?

The principal goal of this Activity is to have you estimate the percent of live coral present at random sections of various transects in the Virtual Reef.  The secondary goal is to estimate the percent composition of the reef by coral type, using a simple coral type classification. In addition to collecting data on the Virtual Reef, this activity is also training you in the Eyes of the Reef Coral identification and statistical estimation techniques, and in the use of the Eyes of the Reef Network Report Form. Once trained, the Eyes of the Reef Network activities can be performed in the water on any coral reefs near your location.

BACKGROUND What is Eyes of the Reef Network

The Eyes of the Reef Network was developed to increase public awareness and engage stakeholders in the monitoring and reporting of coral bleaching and diseases, COTS and marine invasive species. The Eyes of the Reef Network is an islands-wide association of community volunteers, businesses, scientists, non-governement organizations, and governmental agencies who report upon the health of Hawaiian reefs. The network is the first tier of a rapid response protocol developed by the State of Hawaii Division of Aquatic Resources and the Climate Change and Marine Disease Local Action Strategy. The program is coordinated by Dr. Greta Smith Aeby and implemented through the non-profit, community based, counter coral reef monitoring organization Reef Check Hawaii.

BACKGROUND How do you know if a Coral is alive?

Live coral is characterized by the presence of tiny animals called polyps. Polyps live in symbiosis with tiny algae called zooxanthellae which ultimately give the color to coral. The picture on the left is from a section of virtual reef and show individual polyps. Read more on polyps, coral reefs and how they are formed.

There are a few techniques you can use to tell if coral is dead: coral that is only showing the white calcium carbonate skeleton is most likely dead. Coral that is heavily covered by algae, sediment or sand is also likely to be dead.

Fortunately for our survey our focus is to find live coral. As a result, look for coral with color, the darker the better, (but be careful not to confuse it with algae covered dead coral). The Virtual Reef allows you to zoom in close to any particular coral and generally allows you to get close enough that you can see the individual polyps. Use this technique to tell if a particular coral area is alive. Practice doing this on random Virtual Reef transects.

The examples below show you coral reefs that are mostly dead and a live but bleaching case. Note that in that case Polyps are visible, although white. 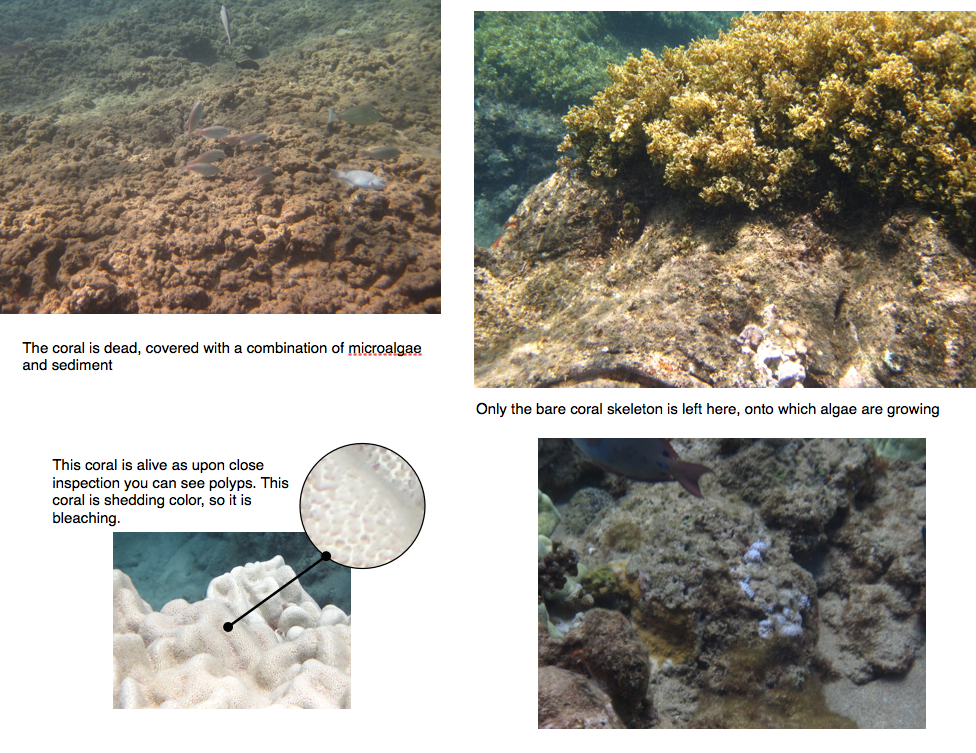 Various studies have been published on the trends relating to coral cover on the island of Maui, the site of the virtual reef. In 2008 Williams, Sparks and Smith published a Hawaii Department of Acquatic Resources report titled Status of Maui's Coral Reefs.  In it, reporting for a period 1999-2006, mean coral cover at nine key monitored reefs declined from 35% when sites were first surveyed (1994 for West Maui, 1999 elsewhere) to 27% in 2006. Thus, nearly 1/4 of all living coral was lost over that period, according to that period. The Virtual Reef allows you to navigate across transects (sections) of reef. In any one section of the reef a certain percent of the reef will be live. The first objective is to determine that percent for various transects in the virtual reef. Once aggregated and averaged, that information will result in an average percent for the entire reef, which is a fundamental measure of the health of the reef.

STEPS Determine the Live Coral Percent in the Virtual Reef

Remember that for both the percent estimates and the coral types you might have situations in which you are not completely certain. Just take your best guess based on the closest approximation.

Below are two examples of  Virtual Reef frames, with an estimate from the card above. If you are having difficulty visually estimating percent in any virtual reef image, you might want to create a screen shot of that image,  print it,  and than use a permanent market to outline the areas of interest (dead or live coral), in the same way as it was done below. 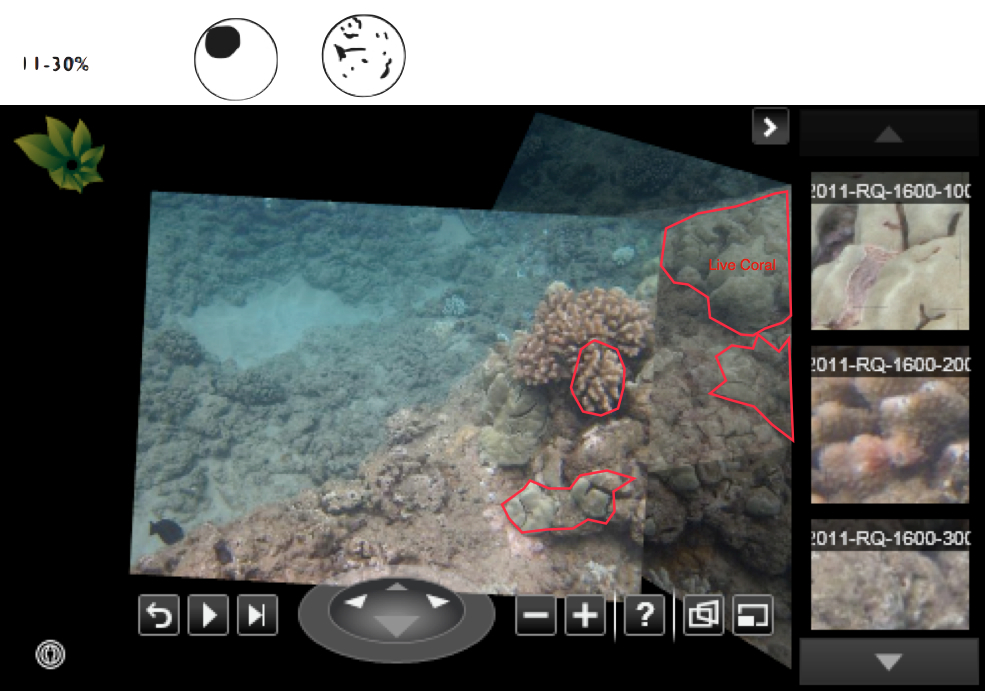 Method II -- Determine the % of Dead Coral and Calculate the % Live. STEPS Entering and Visualizing the Data

Once you complete filling our the Eyes of the Reef worksheets with the data collected off the Virtual Reef you are ready to actually enter the data into our database, and add it that being collected by hundreds of other citizen scientists. You can also visualize the results of your survey.

The data you collect will be processed on our servers and will produce a real-time analysis. Because statistical errors diminish with the number of data points, the more people participate in the survey the more accurate the survey results will become. Click here to see the result of the survey to date.

You need to be a member of ReefQuest to add comments!